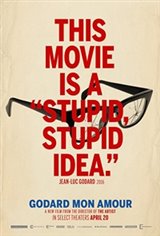 In 1967, the day after shooting the film La Chinoise, Jean-Luc Godard marries his principal actress, 17-year-old Anne Wiazemsky, granddaughter of writer François Mauriac. However, when the film fails, it casts a shadow over their happiness and shakes Jean-Luc up.

In May 1968, the filmmaker and his muse participate in student debates and demonstrations in the street.

Then, with the support of François Truffaut and Alain Resnais, Godard fights for the cancellation of the Cannes Film Festival to show solidarity for the workers and students, and succeeds when a number of directors withdraw their films and protesters refuse to let the other films screen.

Back in Paris, Anne endures in silence as her husband grows more and more odious and irritable. Becoming a Maoist, he founds the Dziga Vertov cinema collective along with journalist Jean-Pierre Gorin. As the two men go to Prague to mount their first project, Anne leaves to shoot a film in Italy under the direction of Marco Ferreri.

For the couple, it's the beginning of the end.