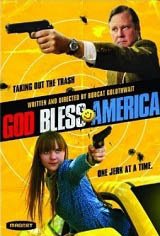 Frank (Joel Murray) has had it. A soul-crushing cacophony of stupidity surrounds him: his neighbors' ignorance and their baby's non-stop bawling; the mindless water-cooler blather of his idiot office mates; a workplace act of kindness that blows up into sexual harassment; and to cap things off, a brain tumor.

Frank finally snaps when the nation unites in the communal ridicule of a simpleminded contestant on a television singing competition. How did his country become so cruel to the poor, huddled masses? Is it a sign of a declining empire when such a lowbrow arena of malice is pedalled as entertainment? Someone must pay.

When Frank reaches for his handgun, he finds an unlikely ally in Roxy (Tara Lynn Barr), a high-school student whose ADD-like intolerance for the morons around her jives with Frank's train of thought. She provides him with the targets to knock off. In turn, he gives her lessons in marksmanship. And so this platonic duo—a 45-year-old and a teenager—embark on a road trip with a body count.