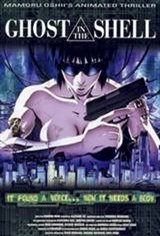 In the year 2029, the world has become interconnected by a vast electronic network that permeates every aspect of life. That same network also becomes a battlefield for Tokyo's Section Nine security force, which has been charged with apprehending the master hacker known only as the Puppet Master.

Spearheading the investigation is Major Motoko Kusanagi, who -- like many in her department -- is a cyborg officer, far more powerful than her human appearance would suggest.

And yet as the Puppet Master, who is even capable of hacking human minds, leaves a trail of victims robbed of their memories, Kusanagi ponders the very nature of her existence: is she purely an artificial construct, or is there more? What, exactly, is the ghost -- her essence -- in her cybernetic shell?

When Section Six gets involved in the case, she is forced to confront the fact that there is more here than meets the eye, and that the Puppet Master may hold some of the answers she seeks. But little does she know that he has been seeking her as well.