Gaspard at the Wedding 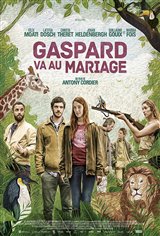 After years away, Gaspard, 25, agrees to reconnect with his family at their zoo when his father announces he’s getting remarried. On the train home, Gaspard meets an eccentric girl called Laura, who agrees to pretend to be his girlfriend for a fee.

Upon arrival, the fake couple is welcomed with open arms by Gaspard’s womanizing father, his brother who takes care of the zoo animals and his younger sister, who thinks she is a bear. All goes well until the wedding is canceled at the last minute and the zoo turns out to be on the brink of bankruptcy.