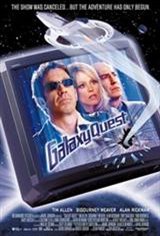 When the television show Galaxy Quest is canceled, the five out-of-work actors decide to travel across the country and visit sci-fi conventions in an effort to keep their popularity from being zapped out of existence. Meanwhile, on another planet, some desperate aliens are in a heap of trouble and begin seeking help. In their search, they come across transmissions of the classic Galaxy Quest show from Earth and believe the cast to be genuine heroes.

Before the crew of the show can say "beam me up", they are kidnapped by the aliens. The crew must now give the performance of their lives, or the inhabitancy of an entire planet will suffer the consequences.