From Up On Poppy Hill (Dubbed) 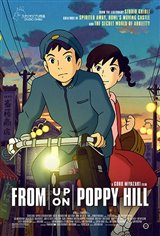 Umi, 16, lives with her grandmother and her two younger siblings in an old boarding house on a hill overlooking the Port of Yokohama in Japan. Her father disappeared at sea during the Korean War and her mother, a medical professor, is studying in the United States. Every morning, the girl hoists two flags facing the bay with the message “I pray for safe voyages,” as her father taught her. Her gesture does not go unnoticed. An anonymous but emotional poem recounts her daily deed in the campus newspaper. Umi meets Shun, the student who wrote the poem, and who is fighting for the preservation of the old building where he works with the newspaper staff. Umi joins the newspaper, and the two form a friendship. But as they get to know each other, Umi and Shun discover a strange and ancient secret that unites them.