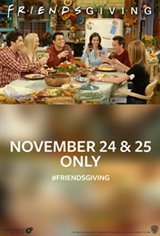 42, 38, HIKE! "Laughter can be infectious," so who better to kick off Thanksgiving with than Monica, Rachel, Phoebe, Chandler, Ross and Joey!? Watch as Monica puts a turkey on her head, Rachel makes a curious trifle cake, Ross reveals an old secret, Chandler declares his love for Monica, Joey tries to devour an entire turkey, and Phoebe exposes something about Chandler's canine allergy.