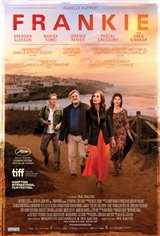 Famous French actress Françoise Crémont, known as Frankie (Isabelle Huppert), takes up lodgings at a picturesque, mountainous resort in Sintra, Portugal when her cancer returns. She invites her family and friends to join her for a summer vacation, which may be her last.

Along on the trip is her second husband Jimmy (Brendan Gleeson), Jimmy's daughter Sylvia (Vinette Robinson) from his first marriage, as well as her husband Ian (Ariyon Bakare) and their teenage granddaughter Maya (Sennia Nanua), who objects when Frankie skinny dips in the pool.

Frankie’s first husband, Michel (Pascal Greggory), who left their marriage after coming out of the closet, also joins them, as does Frankie's close friend Ilene (Marisa Tomei), an American freelancer whom she met on a film set. Frankie hopes Ilene will hit it off with her son Paul (Jérémie Renier), who is still brokenhearted about a breakup, but to her surprise, Ilene has a boyfriend whom she brings along with her — cinematographer Gary (Greg Kinnear).

The movie follows their lives over the course of one day in the historic town, known for its beautiful gardens and fairy tale palaces.