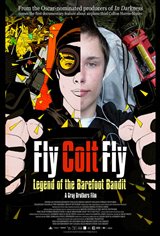 Documenting the story of American teenage fugitive Colton Harris-Moore, who became known as The Barefoot Bandit after leaving behind barefoot prints at the scene of one of his burglaries. At the age of seven, he began living in the woods to escape his neglectful mother and violent ex-con father. That was when Colton began breaking into vacation homes to get necessities such as food and blankets. He often escaped capture by stealing boats and airplanes.

Colton also once broke into a veterinary clinic, leaving behind $100 and a handwritten note that read: "Drove by, had some extra cash. Please use this money for the care of animals." His actions made him the modern day folk hero of a new generation. While telling Colt’s larger-than-life story, this film examines the public fascination with underdog anti-heroes and how fame affects these types of outlaws.