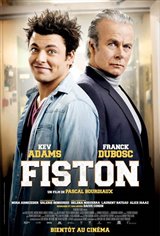 Since childhood, Alex has been secretly in love with Sandra, the most beautiful girl at his high school. Awkward and shy, he’s never had the nerve to talk to her, despite having attended classes with her since they were small. He decides to talk to a reclusive writer named Antoine Chamoine, who is Sandra’s absent father, to find out how he seduced Sandra’s mother Monica years earlier. Although the misanthrope refuses at first, Alex finally convinces him to help. Antoine puts him through a number of tests that help the teenager to become more confident with women in general, and especially Sandra.