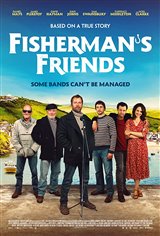 London music executive Danny (Danny Mays) and some of his music friends head to a remote Cornish village for a stag weekend. During their travels they run into a group of fishermen in a band called Fisherman’s Friends who sing shanties, and as a prank, Danny’s boss (Noel Clarke) asks Danny to sign them to their label.

While Danny works to convince the band fame and fortune is just as important as friendship and community, he finds something in the music that speaks to his soul. Danny is soon drawn into the tight-knit community and when his boss' true motives are revealed, Danny is forced to reevaluate what really matters in his life and his job.