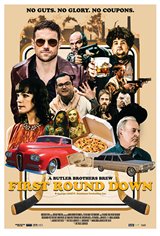 Now living on the straight and narrow as a pizza delivery driver, Tim Tucker (Dylan Bruce) keeps a low key, quiet existence. But when the former hockey star turned hitman returns home following a decade-long hiatus to care for his younger brother in the aftermath of their parents' death, his life is thrown into disarray. His storied past catches up to him and he's forced to confront some questionable decisions.

A former girlfriend and his old mob boss are a couple of people Tim has to face.