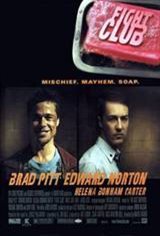 You're rich, you're upwardly mobile, you're young, you're male -- what do you do for fun? Beat the crap out of each other of course! Edward Norton plays a morbid man without family or friends stuck in a dead end corporate job and revolted by the consumer culture his generation lives in.

He meets the amoral Tyler Durden (Brad Pitt), a rebel with many causes. When the two fight for fun, they discover a new sense of exhiliration. Soon, similarly disenfranchised men are enticed by their ritual and boom, an underground fight club is born, where men beat each other senseless to relieve frustration. Simultaneously, a love triangle begins between Norton's character and Tyler's old girlfriend, a heroin addict named Marla (Helena Bonham Carter).

Based on the debut novel by Chuck Palanhiuk.