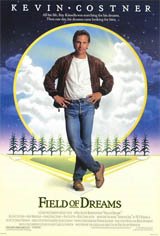 In this film that epitomizes the American love for baseball, Ray Kinsella, a struggling Iowa farmer (Kevin Costner), obeys a mysterious voice in his cornfield that tells him to replace part of his crop with a baseball diamond, resulting in the magical meeting of baseball heroes from the past, including Shoeless Joe Jackson, and the seven other Chicago White Sox players who were suspended for purposefully losing the 1919 World Series.

Even after building the diamond, Ray continues to hear voices, and seeks the help of a hermit-like author in sorting out the mystery, which allows the confrontation of ghosts of other sorts.