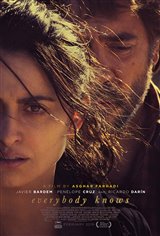 Laura (Penélope Cruz) travels from Argentina to her small home town in Spain for her sister's wedding, bringing her two children, including her teen daughter Irene (Carla Campra) along for the occasion. Her husband Alejandro (Ricardo Darín) stays at home due to work obligations.

Upon arrival, Irene is drawn to a local boy, who shares a secret with her. He tells her that her mother was once deeply in love with a local man named Paco (Javier Bardem), and broke his heart when she left. However, he assures her it's not actually a secret, because "Everybody knows."

During the wedding party, Irene goes missing. A search of her room turns up newspaper clippings about a notorious kidnapping that took place in the area four years earlier. Soon after, mysterious and untraceable texts arrive demanding money, threatening Laura not to contact the police or there will be dire consequences.