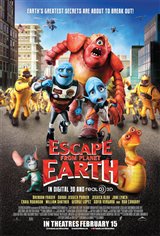 When BASA’s strict chief Lena (Jessica Alba) tells the brothers about an SOS from a planet known to be dangerous planet, Scorch ignores Gary’s trepidation about traveling there and sets off on what he believes will be another exciting mission.

However, Scorch finds himself in a trap set by the evil Shanker (James Gandolfini) and Gary has to rescue not only brother, but his planet, his wife Kira (Sarah Jessica Parker) and their son Kip, who's eager for adventure, just like his uncle.