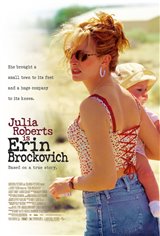 Watch Trailer
Erin Brockovich (Roberts) is a twice-divorced mother of three young children, who struggles to be taken seriously. While working as a file clerk in a small law firm, she stumbles upon a cover-up involving contaminated water in a nearby town which is causing devastating illnesses.

She convinces her boss (Finney) to allow her to investigate, and in the process uncovers the company causing the contamination. Although the local citizens are initially leery of becoming involved, Erin's brash manner and ability to speak to them clearly and frankly earns their trust. With over 600 plaintiffs signed up, the unlikely duo go on to win the largest settlement ever paid in a direct-action suit...$333 million.

Julia Roberts won an Academy Award as Best Actress in a Leading Role for her role in Erin Brockovich.