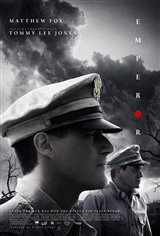 The days following the Japanese surrender at the end of World War II are plagued by great tension and uncertainty. As American occupation forces take over the country, General Douglas MacArthur (Tommy Lee Jones), the Supreme Commander, acts as the de facto ruler of Japan. Under his rule, General Bonner Fellers (Matthew Fox), a Japanese expert, is given the responsibility to reach a decision of historical importance: should Emperor Hirohito be tried and hanged as a war criminal?

While Feller struggles with the monumental task ahead of him, he is also beset by his love affair with Aya (Eriko Hatsune), a Japanese exchange student he met years ago in the U.S. It is on Feller’s quest to find Aya that he discovers how his decision can change the course of history.