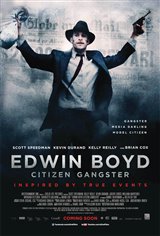 While the Boyd gang committed one of the biggest heists to date in Toronto, Ontario, the story of Edwin Boyd is still widely unknown in Canada, at least since the 1950s. Director Nathan Morlando brought the epic story to the big screen in his film Edwin Boyd: Citizen Gangster. Starring Scott Speedman, the feature follows seven thrilling years of Canadian Edwin "Eddie" Alonzo Boyd, a World War II veteran and family man who turned into the leader of the Boyd gang.

Boyd had a different way of robbing banks than the other members. He was a fearless performer and wanted to be a high profile bank robber. He loved the media attention and was addicted to the spotlight. He was committed to the role of the bank robber, decked out in a suit and stage makeup. Conversely, he was also a devoted family man.

In a CBC documentary, Toronto historian Mike Filey said, "…the interesting thing about Edwin was, if there is such a thing, he was a 'good' bad guy."

Morlando was interested in other aspects of Boyd's life. He wasn't just a criminal—his crimes were committed in order to fund his household, though they may have later turned into an addiction for fame.

The movie portrays his need to support his young family, while regretting unfulfilled dreams of being a Hollywood actor. The director told CTV News when he met Boyd's ex-wife, "It was clear to me… that this was actually a tragic love story."

Boyd was born on April 2, 1914 and just over a year after his birth, Edwin's father joined the army during World War I, returning home a few years later. His family moved several times, but when they finally settled, Edwin became involved in extra-curricular activities including his school's soccer team and the YMCA marching band.

His mother died in the early 1930s from scarlet fever. Soon after, Edwin set out on his own and had his first encounter with the law when he was picked up for vagrancy. A few years later, he joined the Royal Canadian Regiment. When his battalion was posted to Reigate in England, he met Doreen Mary Frances Thompson. The two were married and had their first child on August 20, 1941, but the baby tragically died when, during an air raid, a nurse dropped him on his head. On December 21, 1943, Doreen gave birth to twins.

In May 1945, Boyd was officially discharged and returned home, but found it difficult to secure permanent employment. That was the beginning of Boyd's criminal adventures.

Over a span of two years, Boyd pulled at least six heists, including robbing $3,000 from a North York branch of Bank of Montreal on September 9, 1949. In order to carry out more robberies, he joined forces with robber Howard Gault. Unfortunately, when Gault got caught, he snitched on Boyd and the two were sent to jail where the next chapter of crimes were soon to begin.

In jail, Boyd met two other bank robbers, Lenny Jackson and Willie Jackson (no relation to each other), with whom he exchanged notes and ideas. The three became friends while secretly planning an escape. Lenny Jackson had a wooden foot where he stored several hacksaw blades. In November 1951, the three hacksawed the bars, jumped the wall of the prison and made their escape, where a member of Lenny's gang, Valent Lesso, awaited them.

Eddie Boyd, Lenny Jackson, Valent Lesso (who changed his name to Steve Suchan) and Willie Jackson became a team. Though some say Lenny was the leader for most of the stunts they pulled, newspapers nicknamed the team the Boyd Gang due to Boyd's good looks and irresistible charm. The four pulled off robberies totaling approximately $75,000 in four months.

When Willie was caught and arrested, Boyd went into hiding with his wife. In March 1952, Lenny and Suchan were also captured after a gunfight that left a policeman dead. They were taken to Don Jail, where Eddie would also eventually end up once he was caught. He was placed in a cell with his buddies, who were sentenced to death for murdering the policeman. However, the team was not ready to give up and established a new escape plan. The group became friends with one of the older guards. While joking around with him, one of the jail mates gripped the guard's key ring so tightly that it left an imprint on the flesh of his hand, which they would use to fashion a key for the cell door. The day before Lenny and Suchan were to be hung, they escaped from jail for a second time.

The escape prompted a wide search, with headlines running in newspapers across the country. A huge reward was offered for anyone who could lead the police to the runaways and although there were many sightings leading to calls and tips, none of them panned out. But the gang couldn't stay hidden for long. A mere 10 days after their escape, the Boyd Gang was found and captured at a barn just 24 kilometers from the jail, though Boyd was not with them.

A detective following Boyd's brother discovered that he'd recently rented an apartment and sure enough, the new tenants were Boyd and his wife. When the police crept in to make the arrest, there was no struggle as the infamous Edwin Boyd was captured. He received eight life sentences.

In 1966, after serving 14 years in Kingston Penitentiary, the now-divorced Boyd was released on parole. He was given a new identity and relocated in Victoria, British Columbia where he drove a bus for disabled people. He met a disabled woman whom he wound up marrying and taking care of for 35 years, before they both went into a home. On May 17, 2002, Eddie died at the age of 88.

Morlando spent years researching Boyd through phone calls and meeting with him prior to his death in 2002. The director told CTV News that the infamous, highly profiled Eddie Boyd was a changed man; his new identity was very different. "Ironically it's an identity that was completely obscure, no one knew who he was," said Morlando. However, he also added, "When I saw him in person, it was still easy for him to turn on the charm, point his finger at the camera like a gun. He loved turning it on."