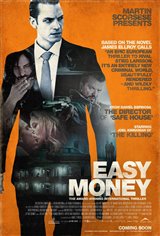 The worlds of three men collide in an explosive and white-knuckled thriller based on Jens Lapidus' 2006 international best-selling Swedish novel, Snabba Cash.

JW is a lower-class business student living a double life mingling with Stockholm's wealthy elite—he even manages to attract the attention of a sexy heiress. To maintain his fancy but fake lifestyle, he's lured into a lucrative but deadly ring of underworld crime.

Jorge is a petty criminal on the run from not only the police, but also from the Serbian mafia. His only hope of escaping for good is to partake in a massive cocaine deal. Meanwhile, Mafia enforcer Mrado is on the hunt for Jorge and will do anything to get his hands on him. But his efforts are further complicatd when he's unexpectedly left to care for his young daughter.

As JW falls deeper and deeper into the dark world of organized crime, the fate of all three men become entangled, forcing them all to fight in the struggle for life and death.