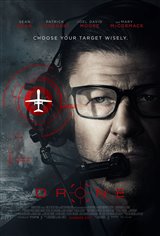 It’s just another day at the office for Neil (Sean Bean), except his office job is a little different – Neil operates military drones tasked with carrying out airstrikes in wars overseas. As Neil sits at his desk, the lives of others are literally in his hands as he gives the commands to strike.

But his life and the life of his family will now be in the hands of another – a mysterious man named Imir (Patrick Sabongui) seeking revenge against the man who took the lives of his own family members – innocent casualties of a previous airstrike.