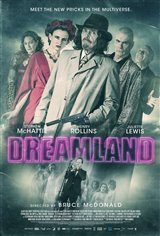 Reluctant hit man Johnny Dead Eyes (Stephen McHattie) is ordered by diabolical underworld kingpin Hercules (Henry Rollins) to cut off the pinkie finger of his jazz legend doppelgänger The Maestro (Stephen McHattie), whose only offense was to forget Hercules' name.

Johnny travels to Europe where he makes his way through a neo-noir cityscape populated with street urchins, vampires, and a crime queen called The Countess (Juliette Lewis), while — like all movie hit men — contemplating getting out of the game. But first he meets a young boy Dario (Morgan Csarno-Peklar), whose 14-year-old sister Olivia (Thémis Pauwels) has been kidnapped for child prostitution. In the meantime, The Countess's vampire brother (Tómas Lemarquis) wants to marry Olivia for her virgin blood.