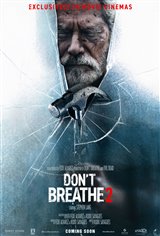 The sequel to Don’t Breathe (2016) is set in the years following the initial home invasion that left blind army veteran Norman Nordstrom (Stephen Lang) hiding in isolation, however, Norman has since taken in and raised a young girl orphaned by a house fire. Their safe haven is shattered when kidnappers take the girl, forcing Norman to end his isolation to rescue her.