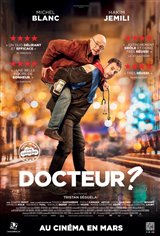 On Christmas Eve in Paris, Serge Mamou-Mani is the only SOS Emergency Response doctor available to respond to minor home emergencies. Called to go to his ex-daughter-in-law’s house for a prescription renewal, he meets Malek, an Uber Eats delivery boy. Shortly after, finding himself the victim of a sudden attack of lumbago, Serge asks the cheerful young man to administer an intravenous painkiller. Poorly executed, the injection paralyzes the doctor's leg. Unable to walk and worried he’ll be fired due to past indiscretions linked to alcoholism and misconduct, Serge forces Malek to take his place for the rest of the visits that night by dictating to him via an earpiece each procedure to follow with different patients. Feeling obliged, Malek agrees, on the condition that he can continue his food deliveries at the same time.