Doc of the Dead 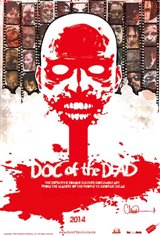 An in-depth exploration into the origin of the zombie as we know it, featuring dialogue with zombie experts and celebrities, as well as participation from YouTubers and indie filmmakers. Doc of the Dead also looks into the possibility and ramifications of an actual zombie outbreak.