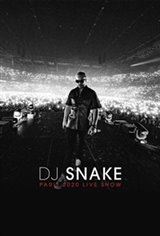 He has conquered the world stage. He is in the top 5 most streamed dance artists globally.

He has collaborated with the biggest world stars, including Justin Bieber, Cardi B, Selena Gomez and J. Balvin. 3 of his songs have over 1 billion streams on Spotify while his videos accumulate more than 20 billions views on YouTube. DJ Snake put together a once in a lifetime performance at the Paris La Défense Arena, becoming the first DJ to play such a large venue. More than 20 cameras shot this historical concert with a spectacular staging. From Turn Down For What, Lean On, Magenta Riddim to Taki Taki, Loco Contigo and Let Me Love You, an unforgettable concert shot specially for the cinema. .