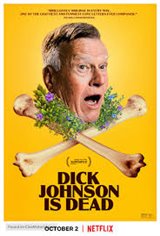 Kirsten Johnson, a longtime documentary filmmaker, can't bear the thought of losing her 86-year-old psychiatrist father. So she suggested they make a movie about him dying, in a variety of ways, and he went along with it. Using stunt doubles, she films him falling on the street, down the stairs, and even lying in a coffin. He does it for his daughter, but he also gets a kick out of all the things he's asked to do for this funny and poignant film about the love between a daughter and father.