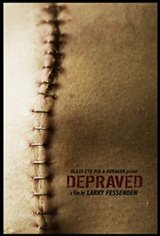 Alex (Owen Campbell) leaves his girlfriend Lucy (Chloë Levine) after an emotional night, walking the streets alone to get home.From out of nowhere, he is stabbed in a frenzied attack, with the life draining out of him. He awakes to find he is the brain in a body he does not recognize.

This creature, Adam (Alex Breaux), has been brought into consciousness by Henry (David Call), a brilliant field surgeon suffering from PTSD after two tours in the Mideast, and his accomplice Polidori (Joshua Leonard), a predator determined to cash in on the experiment that brought Adam to life.

Henry is increasingly consumed with remorse over what he's done and when Adam finally discovers a video documenting his own origin, he goes on a rampage that reverberates through the group and tragedy befalls them all.