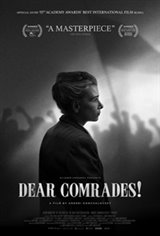 June 1962. In Novocherkassk, a provincial town in the south of the USSR, the local authorities are confronted with an inconceivable event in a communist country: a strike. Faced with a drop in their wages, coupled with an increase in the price of food, the angry workers organize a large rally. Lyudmila, a devoted member of the Communist Party, strongly opposes this demonstration, in which her daughter, Svetka, is nevertheless determined to participate. When the day comes, Lyudmila desperately tries to find her daughter among the demonstrators, whom the army is preparing to suppress with guns and violence.