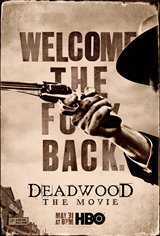 Deadwood: The Movie begins in 1889 in the historic lawless mining camp in the Black Hills, a decade after the action of season three of the HBO series Deadwood took place.

South Dakota is becoming a state, which means villainous Senator George Hearst (Gerald McRaney) is planning a visit to Deadwood. He wants to take the land owned by Charlie Utter (Dayton Callie), and when he discovers that his attacker, Trixie (Paula Malcomson), is still alive (her death was faked at the end of season three), he's taken aback.

When Trixie (Paula Malcomson) finds out Senator Hearst has arrived in Deadwood, she's so dismayed that she goes into labor, giving birth to her child with Sol Star (John Hawkes). She then agrees to marry Sol in a ceremony in which Al Swearengen (Ian McShane), who was formerly her pimp, gives her away.

Meanwhile, twice-widowed Alma Garret Ellsworth (Molly Parker) and her ward Sofia (Lily Keene) also arrive in Deadwood, and run into Seth Bullock (Timothy Olyphant), with whom Anna once had an affair that ended badly.