Dead in a Week (Or Your Money Back) 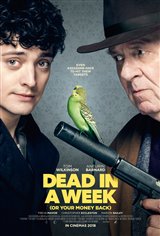 William (Aneurin Barnard), 27, an aspiring writer, has tried to commit suicide 10 times, without luck. He decides to hire a genial professional hitman, Leslie (Tom Wilkinson), 65, who promises William he'll be dead in a week, or he'll get his money back.

However, just after William signs a contract with Leslie, he gets a call from a publisher interested in working with him. Not only that, but he meets the woman of his dreams (Freya Mavor), who works for the publisher. William tells Leslie he wants to call off the hit, but the man refuses, reminding the young man he signed a contract. Leslie has quotas to meet to keep his membership in an assassin’s guild, which means William has to constantly dodge Leslie's attempts to kill him.