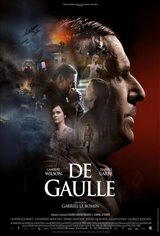 April 1940. Colonel Charles de Gaulle lives his last moments of peace with his wife Yvonne and their three children, including little Anne, 12, who suffers from Down's syndrome. A few weeks later, as the German army crosses the French border, de Gaulle fights in the North and even manages to contain an enemy attack. At the request of Paul Reynaud, President of the Council, who appoints him general, de Gaulle accepts his place in the government. He believes he’ll be able to better organize the response in Paris. But soon after, de Gaulle runs into Marshal Pétain, who no longer believes in a possible victory and wants to negotiate with the invader. During this time, Yvonne gathers the family up to leave for Brittany, which has been spared by the conflict.