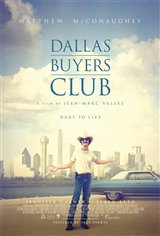 When Texan cowboy Ron Woodroof (Matthew McConaughey) is diagnosed with HIV, he is prescribed a highly toxic drug and given thirty days to live. Refusing to accept this death sentence, Woodroof taps into the world of underground pharmaceuticals and becomes a kingpin of an unapproved alternative treatment that is both restorative and life extending.

Woodroof struggles with the FDA as he helps spread awareness of the government’s misinformation, taking a stand against the politically corrupt who prefer to profit from the sick instead of aiding them in their recovery.