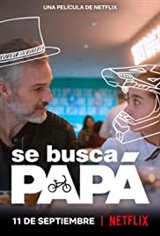 Blanca (Natalia Coronado), 10, is a talented BMX bike rider, so when a friend shows her a flyer advertising a BMX competition that's happening soon, she desperately wants to enter. The only thing is, Blanca's mom Fernanda (Silvia Navarro) doesn't know that she's still riding. After her father died in a bike accident, her mother told her she could never ride again.

Needing parental consent to enter, Blanca and her best friend Laura (Victoria Viera) decide to hold a casting call to find an actor to play her father. However, they run into problems when the actors discover that two little girls are the ones holding the auditions. Finally, she discovers Alberto (Juan Pablo Medina), a taxi driver who was once a popular actor, but quit after his daughter died. She tries to convince him to take the job. Although Alberto is reluctant at first, when he hears Blanca's story, he agrees to help her out.