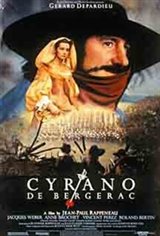 Following the classic Cyrano de Bergerac play, a young officer of the guard and romantic poet, Cyrano (Depardieu), falls in love with his cousin Roxane (Brochet). But fearing rejection because of his large nose, he resorts to writing her letters on behalf of one of his cadets, Christian (Pérez), a hansom lad who is also in love with her, but doesn't have a way with words.

Roxan is easily wooed by the romantic words, but believes they have come from Christian.