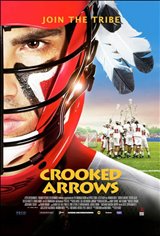 Although mixed-blood Native American Joe Logan has ideas for modernizing the reservation where they live, he first has to prove himself to his traditionalist father, who's a Tribal Chairman. To do so, he becomes the coach of the reservation's high school lacrosse team, which has to compete against the better equipped and better trained players of the elite Prep School League.

Joe tries to inspire the boys on his team and teach them the true meaning of tribal pride. Ignited by his passion and finding new belief as to their potential, the team still has an uphill battle to the state championship finals.