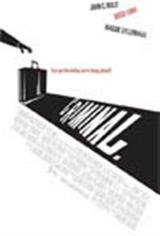 Richard invites Rodrigo to help him pull a few jobs. Richard is then summoned to the luxury hotel where his sister Valerie (Maggie Gyllenhaal) works as the concierge. She says an older Spanish man named Ochoa had been making a scene in the lobby trying to see VIP guest William Hannigan (Peter Mullan). While being escorted out, he had collapsed, but not before begging her to call Richard.

While waiting for the paramedics, Ochoa explains the sting to Richard and Rodrigo. An expert forger, he has made a copy of an extremely rare 1878 Silver Certificate. Hannigan, an Irish multi-millionaire who collects antique currency, must leave the U.S. the next day. If Richard can get to Hannigan, Ochoa knows he'll want the Certificate for his collection. The payoff? At least $500,000.

As the deceptions and duplicity mount, Richard and Rodrigo must negotiate a succession of swindlers, thieves and grifters to pull off the biggest caper of their lives.