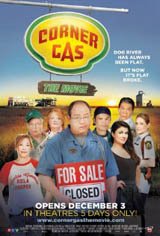 There's suddenly a lot going on in Dog River, Saskatchewan—40 kilometers from nowhere. Fitzy reveals to Brent (Brent Butt) and the gang that he's mismanaged the town's funds and they're on the verge of bankruptcy

Lacey (Gabrielle Miller) tries to rally the residents to raise funds to save the town when they find out there's a $75,000 prize for the quaintest town.

Meanwhile, Davis (Lorne Cardinal) becomes a private eye when Fitzy lays him off due to a glitch in his contract that states he agreed to retire after 25 years of service.