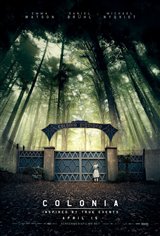 Young German newlyweds Lena (Emma Watson) and Daniel (Daniel Brühl) get separated during the 1973 Chilean military coup. Lena finds out that Daniel has been abducted by Pinochet’s secret police and tracks him to a wooded area in the South of the country, called Colonia Dignidad (Dignity Colony).

The Colonia presents itself as a charitable mission run by lay preacher Paul Schäfer (Michael Nyqvist) but in fact, is a torture house and detention center that no one has ever escaped from. Lena goes to Colonia Dignidad to join the cult in an effort to find Daniel and help him escape.