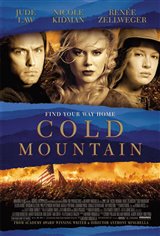 The lives of three people equally uprooted by war are intertwined and their physical and spiritual survival comes to depend entirely on one another. First, there is the Confederate soldier Inman (Jude Law) who, wounded in battle, fights his way home to the woman he loves -- crossing a nation at war with itself.

As he treks towards his beloved Ada (Nicole Kidman), driven by memories, Inman encounters slaves and rebels, fends off soldiers and bounty hunters and finds unexpected friends and dangerous enemies at every turn.

In a parallel journey of faith and newfound bravery, Ada's road is no easier as this once well-bred, sheltered woman must take on a perilous world alone, bereft of companionship or knowledge of the outside world and protect her father's farm from ruin and attack.

Rescue arrives for Ada in the unlikely form of a feisty drifter named Ruby (Renée Zellweger), who becomes an equal part of the story as she teaches Ada about strength, self-reliance and an astonishing natural world Ada has never known.

Now, as they come ever closer to one another, Inman, Ada and Ruby weave a story about the longing for home after being left in the wilderness, the longing for peace after the brutality of war, and the longing for love and family at the heart of the American experience.