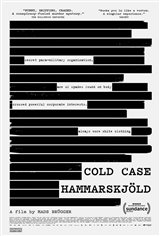 Dag Hammarskjöld was a Swedish economist and diplomat who, in 1953, became the the Secretary-General of the United Nations. When in 1961, he died in a plane crash while on his way to Congo to oversee cease-fire negotiations in the ongoing crisis there, it seemed like an accident.

However, filmmaker Mads Brügger leads an investigation into what happened, and finds that a number of things don't add up, pointing to a global conspiracy more nefarious than anybody could have imagined.