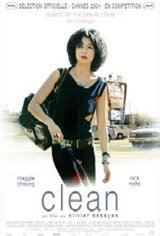 Emily (Maggie Cheung) is the wife of mythical rock star Lee Hauser (James Johnston), whose wasted career is being propped up by their latest manager, Vernon (Don McKellar). When Lee overdoses on heroin in a seedy motel in Hamilton Ontario, Emily is arrested for possession and sent to jail. Six months later, she is released and decides to start a new life in Paris, where she once lived. But now everything has changed. Emily carries the blame of ruining Lee's career and orchestrating his death. The only thing she feels attached to is her son, Jay, who is growing up with Lee's parents Albrecht (Nick Nolte) and Rosemary (Martha Henry) on the other side of the world in Vancouver. If Emily is ever to see Jay again, she will have to leave the past behind, including her dream of becoming a singer.