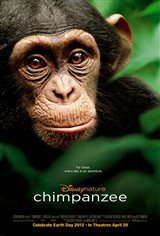 A lovable baby chimp named Oscar lives with his big family unit, including his mother, Isha, in the forest. He and his fellow young chimps love to play, even when their parents would rather have an afternoon nap. But when Oscar's family is threatened by a rival band of chimps, the young chimp is left by himself, unprotected.

Too young to care for himself, he finds himself in a dangerous predicament, until an elderly male chimp decides to care for the youngster himself.