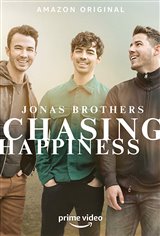 As the three Jonas brothers prepare to reunite for a new studio album, they get together in Australia to reminisce. We see how they first started, with the youngest, Nick, asking his mother if he could audition for a Broadway show.

When he landed the role, his older brothers took an interest, with Joe next getting a part in a musical, while oldest brother Kevin began doing commercials. Having grown up around music since they were born, they formed a music group, playing mostly rock. However, as the children of a pastor, they ran into trouble when the congregation criticized the family for not singing Christian songs. Their father was dismissed and they had to move out of the home that was provided and into a much smaller home, with no income.

With the family struggling to survive, the boys put all their efforts into earning money as a group and were soon discovered by Disney. Kevin, Joe and Nick discuss their regrets, what led to their break up and how they eventually found themselves back together again.