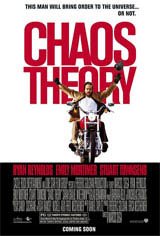 Frank Allen (Ryan Reynolds), celebrated author of the bestseller The Five Minute Efficiency Trainer, has perfected the art of living via a foolproof system of timetables and index cards. In fact, his daily "to do" lists are legendary. A man known for playing it safe, Frank doesn't believe in spontaneity. Every choice he makes is deliberate -- designed to contribute to a well-ordered, predictable life.

But life, as he soon learns, never adheres to a strict schedule.

Frank's wife, Susan (Emily Mortimer), and seven-year-old daughter, Jesse (Matreya Fedor), find his obsession charming in small doses, but as a steady diet it can be very frustrating. One morning, Susan attempts to loosen her husband's scheduling stranglehold by adding ten minutes to his day. But, by setting the clock backward instead of forward, she inadvertently unleashes a series of mishaps that turn his meticulously ordered life upside down. A belligerent ferryman, a ruthless seductress, a reluctant mother-to-be and the secret ardor of his best friend, Buddy (Stuart Townsend), combine to send his life into complete chaos.

As his life unravels in several directions simultaneously, however, a stunning family revelation forces Frank to look fate squarely in the eye.  Shaken to his core, he starts living entirely "in the moment," allowing him to defy the conventions that have heretofore defined him. Those carefully coordinated index cards that had once kept his life in perfect order now become a deck of chance as Frank scribbles spontaneous ideas on random cards, shuffles, chooses and follows the luck of the draw...with unexpected results.

Frank is about to discover that not even an efficiency expert armed with timetables and index cards can change the serendipitous nature of family and friendship, love and forgiveness.