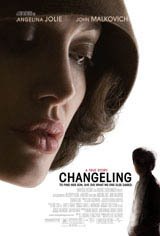 Los Angeles, 1928: On a Saturday morning in a working-class suburb, Christine Collins (Angelina Jolie) said goodbye to her son, Walter (Gattlin Griffith), and left for work. When she came home, she discovered he had vanished. A fruitless search ensues, and months later, a boy claiming to be the nine-year-old is returned. Dazed by the swirl of cops, reporters and her conflicted emotions, Christine allows him to stay overnight. But in her heart, she knows he is not Walter.

As she pushes authorities to keep looking, she learns that in Prohibition-era L.A., women don't challenge the system and live to tell their story. Slandered as delusional and unfit, Christine finds an ally in activist Reverend Briegleb (John Malkovich), who helps her fight the city to look for her missing boy.

Based on the actual incident that rocked California's legal system, this is the shocking tale of a mother's quest to find her son, and those who won't stop until they silence her.