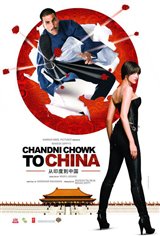 The first-ever Bollywood kung fu comedy, Chandni Chowk to China follows one man's passage from simple cook to kung fu fighter, on a thrilling, madcap journey from the by-lanes of Chandni Chowk in Delhi, India, to the grandeur of the Great Wall of China and beyond.

Akshay Kumar stars as Sidhu, a simple cook from Chandni Chowk who longs to escape his dreary existence. He sees his chance when two strangers from China claim him to be the reincarnation of a war hero from the past and entreat him to come back with them to their village in China. Dreaming of the princely existence that awaits him, Sidhu blissfully sets out for China, never suspecting that he is being set up to take on the vicious smuggler Hojo (Gordon Liu) and help his new friends reclaim their village.