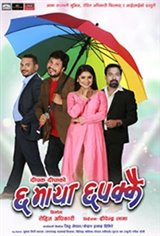 Cha Maya Chhapakkai is a drama comedy by the team of Chakka Panja, the movie is based on the conflict between two families from different political alliances. Due to the rivalry, they oppose their children's love relationship which causes a political revolution in the village.

The movie has portrayed a social problem of Drinking Water in the western part of Nepal. The movie is said to be highest grossing movie of the year 2019 and in the record of Nepali Movie Industry.