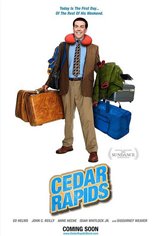 Tim Lippe (Ed Helms) lives in the sleepy little town of Brown Valley, Wisconsin. He was the guy people always thought would go places, but then, he just didn't. When he's sent to Cedar Rapids, Iowa to represent his company at an insurance convention, he has no idea what he's in for. He soon finds himself under the "guidance" of three convention veterans.

From the minute he checks into his hotel with his ancient American Tourister and cummerbund money-belt, it's clear Tim has no idea how the modern world really works. He's soon smitten with seductive Nebraskan insurance agent Joan (Anne Heche) and awed by his experienced roommates, the straight-shooting Ronald Wilkes (Isiah Whitlock Jr.) and the suspicious Dean Zeigler (John C. Reilly).