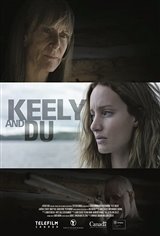 Keely (Laurence Leboeuf), a young pregnant woman, wakes to find herself captive on a remote northern island. Frightened and desperate, she clashes violently with her captors Du (Nancy Palk), the seemingly impenetrable religious fundamentalist who is both her guard and caregiver, and Robert (Aidan Devine), the pair’s only connection to the outside world.

Keely quickly discovers that she is nothing more than a pawn in a sinister anti-abortion agenda being played out far from her wilderness prison. With escape from the island impossible, she must rely on her wits if she hopes to outplay her captors and win back her freedom.

Adapted from Jane Martin’s 1993 Pulitzer Prize-Nominated play Keely and Du, which was the original name for this film when it was screened at film festivals in 2018.